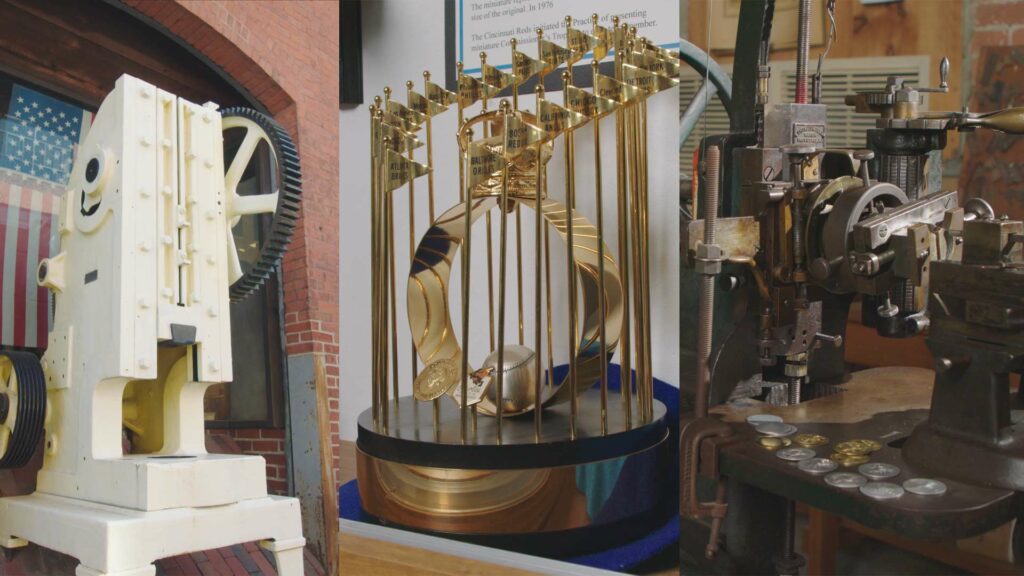 It is the mission of the Attleboro Area Industrial Museum, Inc. (AAIM) to collect and preserve the artifacts, photographs, documents, publications, tools, and machinery that relate to the industrial history of the Attleboro area; to make these materials readily available for both research and enjoyment; and to act as a resource center for the education of the public about the industrial history of the Attleboro area, so that knowledge of the past may contribute to a fuller understanding of the present and inspiration for the future.
1899
Building Established
17500
Items in Collection
Visit Us

The Attleboro Area Industrial Museum was incorporated on July 4, 1975 as the part of City of Attleboro’s Bicentennial celebration. The idea of creating an industrial museum for the area had been in discussions for decades, first appeared in the minutes of the Chamber of Commerce of the Attleboro Area from the 1920’s. The notes mentioned a desire to create an industrial museum to highlighting the accomplishments of the Attleboro area industry.
At the time, Frank Mossberg, a prolific inventor and business owner was president of the Attleborough Board of Trade. The idea resurfaced at an Attleboro Chamber of Commerce meeting and the idea took root with the availability of the building at 42 Union Street, the original Attleboro Refining Company. Our building has a rich history and is considered to be the most important object in the Museum’s collection. In 1899, Harold D. Baker and his brother George W. Baker, both of Providence, Rhode Island, formed a partnership to establish the Attleboro Refining Company in Attleboro, Massachusetts.

Throughout the years four additions were added and on June 26, 1968, Handy & Harman Refining Group, Inc. purchased the Attleboro Refining Company. In November 1973, Handy & Harman left 42 Union Street for a new facility located on Townsend Road in the “new” Attleboro Industrial Park. On November 29, 1976, Handy & Harman turned the 42 Union Street building over to the Chamber of Commerce of the Attleboro Area who acted as caretaker while the Attleboro Area Industrial Museum, Inc. attained a non-profit status with the federal government. The building was in great disrepair when donated to the Museum so, for the first few years, the Board of Directors and Incorporators were concerned primarily with the rehabilitation of the building and grounds. The incorporators were J. Jerome Coogan, Emilio G. Gautieri Jr., George S. Gibb, Elizabeth Hartshorn Phillips, August H. Schaefer, and William H. Ward. The building was located in the jewelry manufacturing center of Attleboro when built in 1899.

Our goals and objectives were created by the originators, they wanted a place, as stated in the mission statement “to collect and preserve artifacts, photographs, publications, documents, tools and machinery from the industrial history of the Attleboro area”. “These materials would be readily available for both research and enjoyment and the museum act a resource center for the education of the community about Attleboro’s industrial history.

We need your help to continue spreading our story.
Volunteer With Us

Archive and catalog Research Library with an emphasis on conservation of objects. Interview required.

We, at the Attleboro Area Industrial Museum, work to preserve and present the rich history of the Attleboro area with an emphasis on its industrial history.